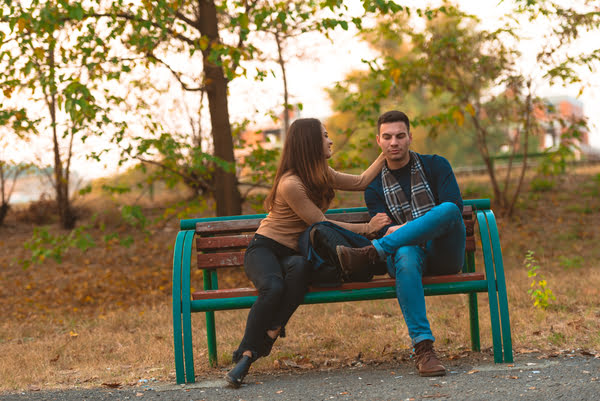 Stonewalling is when one relationship partner ceases all communication with the other partner. The stonewalling partner disengages from their partner, physically and emotionally.

The victim of stonewalling may try hard to get through to a stonewaller. But it’s as if the stonewaller has erected a stone wall around themselves that blocks all communication from their partner.

Stonewalling can take many forms but giving ‘the silent treatment’ is the most common way people stonewall in relationships. Other stonewalling behaviors include:

Stonewalling can be voluntary as well as involuntary. When it’s unintentional, it’s mostly a defensive reaction to stress and overwhelm. When it’s voluntary, it’s usually a punishment for perceived wrongdoing.

1. Stonewalling as a defense mechanism

It may be a lot to handle when things get emotionally charged, especially for men and introverts. Research shows that around 85% of men stonewall in relationships. They go to their figurative ‘man-cave’ and take a long time to self-soothe.

Women, on the other hand, can self-soothe relatively quickly. One minute they’re angry with you, and the next, they’re saying loving things to you.

Women feel stress and drop that stress rather quickly with some ‘self-care’. For men, stress is a problem they need to solve quietly in their ‘man-cave’.

Both relationship partners have the desire to connect with each other. When one partner thinks they’ve been wronged, they’ll stop talking to the other partner. This silent treatment sends the following message:

“I’m withdrawing my love, care, and support because you wronged me.”

It’s an act of revenge and punishment. It’s also a way to exert power.

3. Stonewalling as an avoidance mechanism

Stonewalling can be used to avoid or de-escalate conflicts. Conflicts gain momentum when there’s a continuous back and forth between the two parties. When one party stonewalls, it short-circuits the conflict.

Also, it’s just fruitless to argue with some people. No matter what you say, you know they’re not going to listen. They refuse to empathize with you or don’t know how to communicate. In such cases, stonewalling can be a valuable tactic to avoid long, pointless arguments.

Stonewalling can be damaging to a relationship because it closes all lines of communication. Communication is what keeps relationships alive. In fact, research has shown that stonewalling is a significant predictor of divorce.

Getting through to a stonewaller

Before you take steps to re-establish communication with a stonewalling partner, try to figure out what they’re trying to achieve with their stonewalling? Is it a defense mechanism? A punishment? Or an avoidance strategy?

Sometimes these reasons can overlap.

If you have no reason to think that your partner may be punishing you, great. You only need to give them space to calm down and process their emotions.

Once they do, they’ll resume communication with you as if nothing happened. Once communication is on again, you can complain about their stonewalling behavior assertively. Let them know how it makes you feel and why it’s unacceptable.

Responding to stonewalling by getting angry or trying too hard to re-establish communication immediately seldom works. If you batter a stone wall, it won’t break you’ll only get hurt. There’s a reason they’re showing this behavior. Let them.

If you have reason to believe that stonewalling is a punishment, you need to follow the same strategy. Give them space to stonewall.

What you do next will depend on how much you value the relationship. After you’ve given them some time, resume communication. Ask them why they stonewalled on you.

Often, you’ll find they had a genuine reason to feel wronged. Apologize if you did wrong them, intentionally or unintentionally, and clear their misconceptions if you didn’t.

Tell them that even if they felt wronged, they should’ve been upfront about it and that stonewalling isn’t the way to handle such issues. Be sure to call them out on their stonewalling, so they don’t repeat this behavior.

If they’ve been stonewalling you over and over, chances are they’re using stonewalling to manipulate you and exert power over you. If you always rush to win them back after a bout of stonewalling, they have an excellent little weapon in their kit they can use any time they want to have their way.

In this case, you want to respond to their stonewalling with stonewalling. By doing that, you’ll be sending them the message that you can do it too.

If they care at all about you, they’ll be forced to quit their game, and the power struggle will end.

Stonewalling in relationships is a symptom of a lack of open communication. If partners cannot openly communicate their hopes, dreams, fears, and concerns in a relationship, the relationship won’t last.