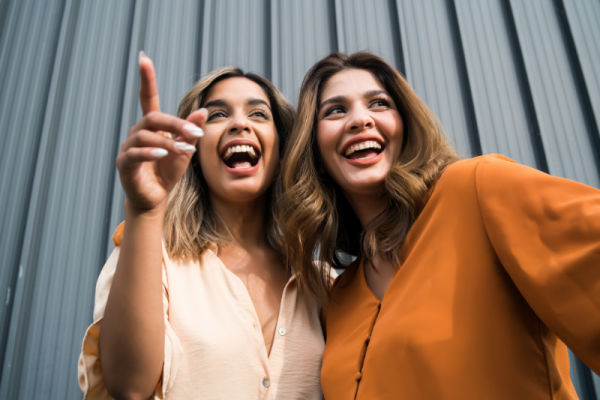 Laughter is not only the best medicine but also a great way to raise your status in society. When you make people laugh, you make them feel good. This makes them perceive you as a valuable member of society and your self-esteem rises.

So, it makes sense to want to learn how to make someone laugh, especially in present times.

As stress continues to become a normal part of the human condition these days, people are increasingly looking for ways to cope. Laughter is a healthy way to cope with stress. It improves physical and mental health.

That said, we’ll also briefly discuss why the tactics work in the light of the theories.

Laughter almost always occurs when people experience what I call ‘a harmless shock’. Laughter comes down to pattern-breaking. When you break someone’s pattern of perceiving reality, you violate their expectations and shock them. When this shock is harmless to them, they laugh.

Our brains are wired to notice changes in patterns. In ancestral times, a change in a pattern usually meant there was a threat in the environment. The sound of a twig breaking in the bushes, hearing footsteps and growls at night, probably meant that a predator was nearby.

Therefore, we’re wired to pay attention to a disruption in our patterns. Such shocking events create tension in us and frighten our brains. When we learn that the shocking thing is actually harmless, we laugh to release that tension.

Another closely related theory of laughter that makes sense is the superiority theory. According to this theory, laughter equals winning. Just as we scream when we’re victorious in a contest, laughter is a way of expressing victory over someone or something.

A joke is like a game. In a game, there’s this initial phase in which tension builds up. The greater the tension and conflict, the more you scream with joy upon being victorious.

Similarly, in many jokes, there’s this initial phase where the setup or groundwork of the joke is laid. This increases tension, which is then relieved via the punchline. The greater the tension, the harder you laugh to release that tension.

As Charles Gruner, author of The Game of Humor, says in his book:

“When we find humor in something, we laugh at the misfortune, clumsiness, stupidity, moral or cultural defect, suddenly revealed in someone else, to whom we instantly we feel superior since we’re not, at that moment, unfortunate, clumsy, stupid, morally or culturally defective.”

So, when you’re trying to make someone laugh, it helps to know what kind of humor they’re into. Many people aren’t self-aware enough to tell you what things they find funny. You may have to find that out yourself. You do that by throwing all kinds of jokes at them and seeing what they respond to.

Once, a good friend of mine recommended a TV show called South Park to me, saying it was hilarious and satirical. I like satire but I don’t like toilet humor. There was a lot of the latter in the show and I just couldn’t stand it. I also don’t enjoy slapstick and adult humor. I mean, those jokes have to be really, really funny to break out a chuckle from me.

I’m more into smart and creative humor like sarcasm, irony, puns, and satire.

The point is, you’ll have to work a lot harder to make me laugh if you don’t make jokes that are in line with my preferred type of humor.

How to make someone laugh

Now let’s look at some of the specific tactics to make people laugh that are in line with the theories of laughter.

One of the best examples of effective tension-building I’ve ever seen was in the 2005 movie Cache. Watch the clip from the beginning till 2 minutes 22 seconds:

Imagine if the speaker had magically turned into a dog at the punchline. The ‘harmless’ part of the ‘harmless shock’ would’ve gotten removed and the people would’ve screamed in fear and shock, not in laughter.

Sarcasm is saying the opposite of what’s true. Sarcasm and irony need to be accompanied with a sarcastic tone or facial expression (rolling eyes) for people to get it or it gets taken literally.

Irony is saying or showing people something that is contradictory. The contradiction shocks the brain harmlessly. Here’s an example of irony:

“My niece calls me ankle; I call her knees. Ours is a joint family.”

“I’m a big fan of whiteboards. I find them quite re-markable.”

“I’m firing my massage therapist because he rubs me the wrong way.”

“A guy invited me to play soccer. I said I don’t know how to shoot so I’ll pass.”

“A farmer I know is too afraid of growing fruits. Seriously, he needs to grow a pear.”

At first glance, puns and witty remarks may seem to have nothing to do with sudden superiority. But remember, the superiority theory of humor says we laugh we when feel superior to someone or something.

Puns tend to follow the typical structure of a joke. First, groundwork is laid for the pun to provide context and build tension. Sometimes the word or phrase used in the pun itself creates tension in your mind because it has multiple meanings.

When you realize that the punster intentionally created the double-meaning situation, the tension is relieved and laughter ensues.

You use an understatement by making something big appear smaller or making something serious appear less serious. This creates a comedic effect because you’re breaking pattern. You’re presenting familiar things in an unfamiliar way.

Say there’s a hurricane in your area and you say something like:

“At least the plants will get watered.”

It’s funny because no one sees a natural disaster like that.

Also called hyperbole, these are the opposite of understatements. You make something bigger than it actually is or more serious than it really is. Again, these break people’s patterns, presenting the familiar in an unfamiliar manner.

Once, my mother went to a picnic with some of our relatives. When they were about to eat, my aunt and her kids grabbed the biscuit bags- without asking others first- and began eating them.

My mother had an excellent way to describe this behavior. She said:

“They had their heads in the bags.”

This line had me rolling, and I wondered why I found it so hilarious.

Of course, they didn’t have their heads in the bags, but saying it this way communicates your disappointment at their cattle-like behavior. It paints a vivid yet deplorable picture of the behavior in your mind. You’re superior and they’re inferior. You can laugh at them.

This is an advanced technique that is often used by professional comedians. You say X to someone which creates a shared context between you two. Later on, in the conversation, you refer to X. Your referring to X is unexpected and breaks pattern.

Say your name is John and you’re eating with a friend. They ask for some of your food and you’re like: ‘John doesn’t share food’. Your friend won’t laugh if they haven’t seen Friends.

Sometimes, a comedic effect can be achieved merely by observing things as they are with no additional layer of sarcasm or irony. When someone tells you a relatable truth, you laugh because nobody verbalized that observation before. This violates your expectations.

You can make anything funny by injecting some sort of novelty into it. Something that violates the expectations of your audience. For this, you have to know what they expect and then defy their expectations.

You don’t need any of the above-mentioned tactics to do it. You can inject novelty into a situation simply by saying something ridiculous or impossible.

Say it’s raining heavily and someone asks you how heavy the rain is. You say:

“I think I saw an ark pass by with animals.”

Of course, it also uses callback. Those not familiar with the biblical story will only get confused by that reply.

When you do impressions of a celebrity, people find it funny because they only expect the celebrity to behave that way. When comedians do impressions of others, they also tend to make fun of those they’re imitating. This adds a layer of superiority to the joke to make it funnier.

We can not only violate expectations with words but also with actions. This is where slapstick comedy, practical jokes, antics, and pranks come in. There’s a lot of such stuff on social media and people seem to love it.

A lot of slapstick humor consists of people falling or slipping. Seeing someone else in an inferior position like that makes people laugh, lending credence to the superiority theory.

Charlie Chaplin’s stuff and the funny movies of Robin Williams fall under this category of humor.

A note on self-deprecating humor

It works because it puts you in an inferior position and makes the listener feel superior. Also, people making fun of themselves is unexpected.

However, the risk of putting yourself down is that people respect you less. Self-deprecating humor can only work in certain situations.

As you can see, self-deprecating humor is only advisable when others already know you’re a high-status person, i.e., when they already have a high level of respect for you. You may even come across as humble or a good sport in such cases.

You can freely make fun of other high-status people, though. You have nothing to lose. The people you’re making fun of are those that your audience envies and loves feeling superior to (aka celebrities).

Lastly, avoid making fun of low-status people as much as possible. People who’re poor, sick, or unfortunate in some way. You come across as insensitive.

If you make fun of the victims of a recent earthquake, people will say “Too soon!” even if they feel like laughing because of the sudden superiority (they’re fortunate in comparison).

Still, they realize it’s insensitive to make such a joke at such an early stage when the ‘unfortunate ones’ are still healing their wounds. As time passes and it’s no longer ‘too soon’, you’re sort of allowed to make fun of them.

Humor is a skill like any other. If you believe some people are naturally funny and you’re not, you won’t even try. Like any skill, you’ll probably fail at first many times before you get good at it. It’s a numbers game.

You have to risk throwing jokes out there and not be bothered if they fall flat. One great joke can make up for 10 bad ones, but you have to be willing to make the bad ones first to get to the good one.