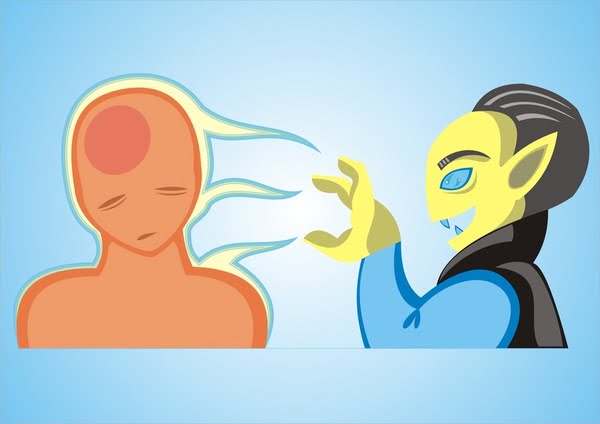 Because they drain your energy so much, you don’t feel like spending time with them. In contrast, some people fill you with energy, and you want to spend more time with them.

An emotionally draining person sucks more energy from you than they put into you. It’s like thermodynamics if you remember your high school lessons. A healthy interaction is one where there’s a balance of giving and taking energy.

Traits of an emotionally draining person

We can all be emotionally draining at times when there’s an imbalance of energy in our interactions. Psychologically healthy people note these imbalances and take steps to re-balance.

An emotionally draining person is typically on the high end of the Neuroticism personality dimension. They’re constantly negative, worried, anxious, and nervous. All of us experience these feelings from time to time, but for neurotic personalities, these experiences tend to be sticky. They last longer and seem more intense.

They spread these feelings to others around them. The others find themselves battling with negative feelings that aren’t even their own. Hence, they end up emotionally drained.

They’re on a constant lookout for drama and conflicts. Almost all their relationships suck because they drag people into unnecessary arguments and disputes.

The desire to engage in drama and conflicts is mainly to get attention and validate themselves. When others get trapped in their drama, they feel a sense of self-importance.

Self-aware people keep learning from their mistakes and keep improving themselves. Since an emotionally draining person satisfies a core need to feel important via their drama, they fail to see how it’s affecting their relationships.

As a result, they keep repeating the same drama repeatedly and never change. Trying to make them understand what they’re doing is usually an exercise in futility.

5. They make you react emotionally

No matter how many times you tell yourself that you won’t get sucked into their drama, you keep falling for it. This is because emotionally draining people have a knack for eliciting emotional reactions from others.

It’s all in the voice tone and body language they use. Their tone can be so accusatory that you’re forced to defend yourself and reply similarly. They yell, making you yell in turn. Before long, you find yourself in another mess with them.

6. They don’t admit their faults

Their lack of self-awareness makes them incapable of taking responsibility for their own role in conflicts. Also, when you admit your mistakes and apologize, a conflict can come to a screeching halt. They don’t want that. They want to drag on conflicts because they thrive on them.

7. They have a victim mentality

It stems from their trait of not taking responsibility for themselves. They believe they’re the victims of other people and circumstances. They don’t focus on what they can control.

Everything is about them all the time. During a conflict, they have a laser-like focus on their own problems and needs. They don’t seem to care about your needs. They want you to empathize with them but don’t have any empathy for you.

Striving to make sense in arguments is often the demise of arguments. That’s the last thing they want. They want to do what they can to prolong the arguing.

Recently, someone called me up and wanted some counseling. I listened to what she had to say and gave her some practical advice. Her response implied that my advice was common sense and what ‘psychologists often say’.

With them, it’s never like they ask you for something, you refuse, and they’re like, “That’s okay”. They can’t take no for an answer. At least not the first time. Only when they’ve dragged you in the mud and exhausted you with aggressive demanding, will they be okay with your “No”.

You have to walk on eggshells around emotionally draining people because you never know what will trigger them to explode on you. Since they’re highly neurotic, they tend to make things worse than they really are.

They manipulate you with powerful emotions like fear, shame, and guilt. Blaming others comes part and parcel with not taking responsibility for your faults. After all, responsibility has to lie with someone. Why not you?

At the end of every heated exchange with an emotionally draining person, somehow you’re left with all the guilt and blame.