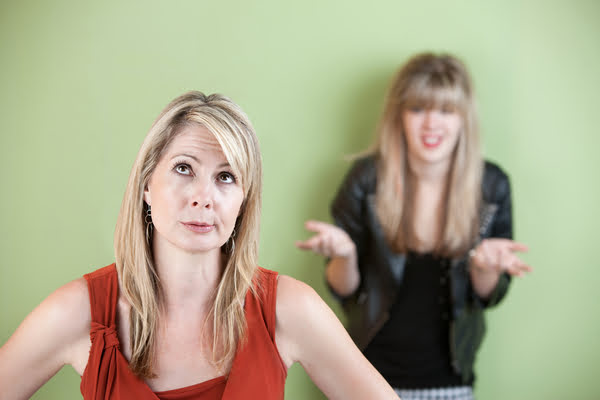 Toxic behavior is any behavior that causes harm to others. Often, a toxic person cannot see their own toxicity because they can’t objectively observe their own behavior. Before accusing someone of being toxic, it’s always a good idea to verify their toxicity from other observers.

In this article, I’ll list out the signs of toxic daughters. It’s a topic that doesn’t get talked about a lot. What usually gets talked about is toxicity in parents, partners, siblings, and in-laws.

If these signs persist into adulthood, she’s likely to be.

Without further ado, let’s dive in.

Contempt is disrespect mixed with intense dislike. If your daughter has no regard for your opinions, values, and boundaries, it’s a sure sign of hatred or at least not caring about you.

A toxic daughter will repeatedly say mean things to you to hurt you. She’ll criticizes you harshly and put you down.

We’re all genetically programmed to be selfish, but we need to override that selfishness with empathy for our relationships to thrive.

Toxic daughters haves no empathy and they’re narcissistic. They only care about their own needs and well-being. If you need something from them, good luck trying to convince them to help you.

She probably learned a long time back that she can have her way by being dominating. She uses yelling and threats to make you comply with her.

A toxic daughter will blame you for everything that’s wrong with her life, even if the blame is unwarranted. Somehow, she twists every bad thing that happens to her into your fault.

If she has learned that being dominating doesn’t work, she’ll use manipulative tactics to have her way. For instance, she’ll act all sweet and charming when she needs something from you and go back to her rude self later.

They show passive-aggressive behaviors like giving you the silent treatment, not returning your calls and texts, and ‘forgetting’ to do what you asked them to do.

Many of these signs are present in the teenage daughter, but if they persist after teenage, there’s cause for concern. An adult daughter who verbally abuses you and throws temper tantrums carries unresolved issues and resentments.

If you’re a mother, you may have sensed jealousy in your toxic daughter, especially if you’re still young and have maintained yourself. It’s natural for women to compare themselves with each other based on youth and beauty.

It’s natural for a woman to feel jealous in the presence of a better-looking woman. Jealousy becomes toxic when you act on it. For example, she may say things like:

“I’m way more beautiful than you.”
“Your skin is so wrinkly.”
“I have nicer hair than you.”

While a part of you brushes these off as innocent comments, another part of you is staggered as to why she’d compare herself to you.

9. She accuses you of being jealous

She may accuse you of being jealous of her beauty, youth, romantic partner, or career success. If you disapprove of her decisions, she’ll blame it on your jealousy. She won’t ask for the reason behind your disapproval.

10. She ignores you after marriage

While it’s normal for people to prioritize their partners after marriage, completely ignoring your parents could be a sign of toxicity.

11. She compares you to her in-laws

She may sing praises of her in-laws and to sting you, she’ll say things like:

“I feel more respected and at home with my in-laws.”
“My in-laws are the parents I never had.”

12. She turns family against you

Toxic women can be real experts at using people, especially men, against people. Your toxic daughter may turn a family member, such as your spouse, against you just by using words.

That parents can be really toxic is common knowledge. But we also need to see another side of the coin. When children read up on all the different ways in which toxic parents behave, they rarely take a moment to step back and think:

“Could I be contributing to this toxicity somehow?”

That’s the question I want you to ask yourself.

Sure, the above signs are all toxic, but they may be reactions to toxic behavior on your part.

For instance, if you’ve shown signs of jealousy towards your daughter, it’s only fair for her to accuse you of being jealous.

If you didn’t parent her well, no wonder she thinks her in-laws are better. Maybe they are.

If you’re mean to her spouse, she may have done the right thing by completely ignoring you after marriage.

The point is: It’s easy to label someone toxic and be blind to our own damaging behaviors. To successfully resolve a conflict, both parties must admit and fix their shortcomings.